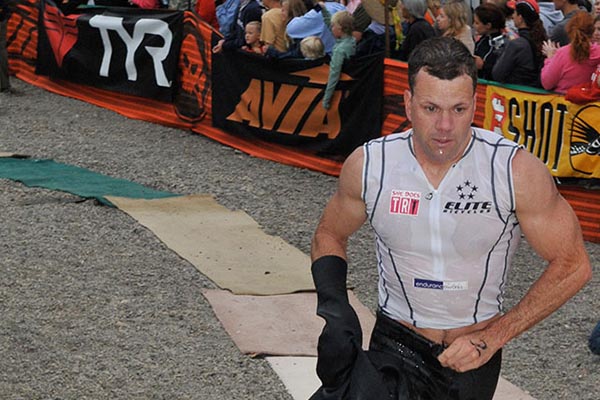 As I headed out of transition at the start of the 26.2-mile run, race announcer Dave Latourette yelled to me: “You’re 24 minutes back on the leader.

My heart sunk as a surge of disappointment and sadness welled up inside me. This was my 6th time racing in Vineman (2.4-mile swim, 112-mile bike, 26.2-mile run) in Santa Rosa, CA, and I had won the race two years ago by taking the lead at the end of the bike leg.

“Why am I doing this?” I asked myself. Trailing so far back from the leader, I contemplated quitting, as I began the run, urged on by my inner gremlins.

Then I remembered what my friend, Brady, told me (along the lines of): “Just give yourself 20-30 minutes to settle into the run before making any judgment.” I compromised with my inner gremlins to run “just one lap” then see how I felt. One lap was 1/3 of the course. Not that far. Just move forward. I could always drop out after that.

At the start of the run, my right leg – the leg that I’ve been troubled by since the Ocala Marathon in early 2009 – immediately tightened and nearly locked up. As I progressed out along the course for the first of three laps, my whole body began to hurt from the pounding on my feet and knees to a headache in my head.

At the end of the first lap, I truly wanted to quit but I was afraid. My fear was that if I quit, quitting would too easily become a habit. As humans, I believe we can rationalize any decisions we make. But, I needed something else more than that fear to keep going.

Leadership by example. These words were ingrained into me by the Naval Academy and the Navy. The primary motivation that kept me from quitting was the example I was giving my coaching clients: How can I ask them to do something that I’m not willing to do? I can’t.

With no chance at first after the bike, the competition on Saturday was all within myself.

Although I had irrationally dreamed of a fast time pre-race, I knew in my heart that my body was not ready to do what it did in 2007. I swam an unexpectedly fast swim but watched as my irresponsible dream slowly evaporated on the bike, as I was first 3 minutes then 14 minutes then 24 minutes behind the race favorite at the bike start, halfway point and bike finish.

There is something pure and emotionally raw about completing an Ironman triathlon. Even though I had already completed 25 Ironman distance races, this one was just as real and just as raw as the first. The distance hurts physically – sort of prolonged head battle between negative self-talk and motivating desire.

This race kept me honest. If I want to get faster like I did in 2007, then I need to make the commitment and invest the time to make it happen. Eight weeks of focused training starting June 1 – my “D-Day” for deciding to do the race – was not enough as I discovered. Improving my fitness to a sub-9 hour Ironman performance is possible. I believe it is. I do feel a sense of satisfaction in my race. I faced the fear and uncertainty that was inside me and I prevailed. I also feel a longing – I have gone faster on this course and I have the desire to go faster once again.

The question that I have to answer to myself is whether or not I want to make “faster” happen. I can’t answer that question yet. A quick “thanks” to everyone who helped me through this race: Krista for her support and love; Frosty for racing with me again; Brady for the “stretch” workouts; Kim, Kim and Kona for letting Krista crash at their home in Forestville; and my mom and brother for coming to cheer me on.