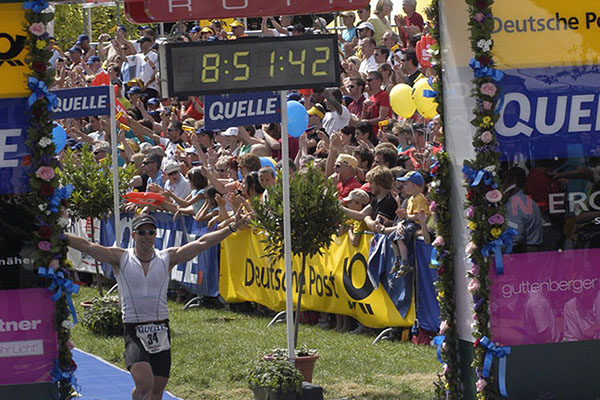 My dream goal for this year was to go under 8:30. I could hit the time (at least on paper) with a 0:52 swim, 4:40 bike and 2:50 run plus a few minutes of fluff added in for transitions and any potential problems that always seem to appear on race day. I hit none of those splits on race day and even finished in a relatively slow (for me) swim of almost 58 minutes, which was not very positive feedback so early in the race. Yet, I took my swim in stride and found my positive flow about an hour into the bike, which carried me through most of the race. I suffered greatly on the second half of the run (to be expected) but still maintained a “fast enough” pace to still achieve a PR by a solid margin.

Roth is a magical venue. It’s hard to describe the Challenge experience to someone who has never done an Ironman here as it is unlike any other of the dozen or so Ironman races that I have done. Climbing the hills in Solar Berg are like experiencing the Tour de France as one sees on TV with thousands of spectators cheering, “Hop! Hop! Hop!” and “Super! Super!” as each cyclist climbs through the narrow channel of cheering, yelling bodies. The race organization executes flawlessly from a participants perspective and the quality of the amenities – pre-race food, race food, finisher’s shirts, premiums, awards, etc. – are top notch. Also, in spite of potential language and cultural differences, I felt completely comfortable during the race.

This was my 3rd year in a row at the Quelle Challenge Iron-distance triathlon (2.4-mile swim / 112-mile bike / 26.2-mile run) in Roth, Germany. The first year I arrived in Germany with the attitude that, given the extremely fast course times, the course was easy and that I would automatically be able to set a PR. I was wrong. The bike course is not easy nor is it flat it is rather technical with several decent hills and many long, rollers. The run course is mostly flat on forgiving surfaces along the canal but a marathon is still 26.2-miles no matter the course.

I finished my first Quelle Challenge in 9:31 for 83rd place overall. The second year, I fell short again of my goal by finishing in 9:19 for 63rd place overall. This year, I set a new PR and finished 23rd overall amongst a field of more than 2,600 individual starters that arguably is second only to the starting field at the Ironman World Championships in Kona, Hawaii. So, yes, Roth can be a very fast course but it is neither an easy course nor an easy race!

I continue to be impressed by both the top elites and the average Roth finisher. The professional field at Roth boasts a deep talent bench, which included:

Unlike all of the US Ironman races with their 17-hour cut-off times, there is a 15:30 cut-off time at Roth. After racing here the first time in 2005, I realized why the bike course times are so fast – it’s because the riders in Europe tend to be much stronger cyclists on average than their US counterparts in US races.

After the race, I gimped over to pick up my finisher’s certificate and morning clothes bag then to the shower to rinse off. As I walked out of the shower, Andreas Niedrig, a former top German pro and legend now doing this race “for fun” said something to me in Germany too quickly for me to understand. “I’m sorry, English please,” I replied back.

“Oh, OK. Why are you walking so funny?” he said jokingly. I laughed then sat there for ten minutes and talked to him. As I stood up to leave, I asked him to sign the back of my finisher’s certificate, which he did. He was a nice guy and personified the German passion for the sport of triathlon.

More about My Race

I believe there are three primary components to a successful Ironman race – physical fitness, mental state and race execution.

More about My Race: Physical Fitness

On race morning, I weighed myself at 79.6 kilograms (175 pounds). This was the heaviest I’ve been in recent memory and 15 pounds heavier than when I set a marathon PR at the Disney World Marathon in January. I attribute some of the weight gain to tapering, which allows my body’s glycogen (carbohydrate) stores to fully replenish thereby requiring my body to retain water in order to store the glycogen and some of the weight gain to eating too much. I do not count my calories and tend to eat both frequently and until I am full when training. It’s hard to break the eating habit when backing off the volume during tapering. In all honestly, I was not worried about the weight gain – it was more an observation and awareness of something that I should address more aggressively in future races. After the raced and more than 2 liters of beer, I weighed in more than three kilograms (6.6 pounds) less so my water loss during the race was significant.

My endurance fitness leading up to this race was excellent. As mentioned, I had set a PR at the Disney Marathon in January – after running the Disney Half Marathon the day before – so reasonably expected to be able to run a PR for a marathon within an Ironman-distance race. I have been working with professional German Triathlete and Coach Olaf Sabastchus (www.quozo.biz) since Roth last year so I was curious to find out how his training program for me would improve my results. Clearly, my training plan worked for as I set a personal best time on race day.

If you’re wondering what the secret is in training to achieve a fast Ironman time, then hire me as your coach and I will tell you. *grins*

More about My Race: Mental State

I thought long and hard about this race in the months leading up to June 24th. I played the race out in my mind (visualization) several times every day, especially during work out. I had made a number of career and lifestyle decisions to put myself in an optimal place both physically and mentally to achieve a super fast time. In the weeks leading up to the race, I began experience a consistent state of flow. Everything seemed to going my way and I was full of “good luck.”

I achieved what I believed to be an optimal state of flow about an hour into the bike as I totally entered the zone, time distorted and I became absolutely absorbed in my race. No distractions and nothing else mattered.

Yet, my mental preparation and execution are areas in which I can still improve my triathlon (and life) performances – all else being considered equal. Doing well this race has given me more confidence to take more risks and further extend my envelope of comfort.

More about My Race: Race Execution

From a pacing perspective, I executed my race flawlessly. If done over again, I would not change any of my levels of effort at any point during the race.

The 2.4-mile (3.8-km swim) is always somewhat hit or miss by a few minutes for me. I did not have the luxury of finding good feet to swim behind for most of the swim. I did have fingers tapping my toes throughout the swim so at least I provided a few minutes to some one else(s). When I exited the water, the 57:XX that I saw was about five minutes too slow for what I wanted, but I would still start the bike within the hour so I let the negative feelings go and shifted focus to racing well on the bike.

I made a few tactical mistakes during the bike. The first, which I’m not quite sure was that my chain jammed between the smallest cog for the rear cassette and the chain stay about 3 km into the bike. I likely caused the chain jam by shifting into the smallest cog across too many cogs, too quickly while under tension. When the chain jammed, I could not turn over the crank arms and tried unsuccessfully to shake the chain loose. The “stop and fix” cost me one minute.

Approximately 50km into the 180km bike course, I made a second mistake. I accidentally tossed one of my fluid bottles. I had prepared two bottles with a concentrated mix of Carboo4U a new endurance sports drink formulated by my coach Olaf Sabastchus. My plan was to carry enough concentrated sports for the ride duration drink then dilute with water from the course. Additional calories would come from Hammer Gel, which I have used very successfully in past races. This plan worked well until I prematurely tossed away a bottle of my concentrated sports drink forcing me to switch over to the race provided sports drink, which did not agree as well with my stomach (i.e. I threw it up). This did not appear to affect me directly on the bike but would affect me later on during the run when I became dehydrated and started bonking.

My run pacing was spot on for the first third of the marathon as I was holding a 2:50 marathon pace. Then my inner thighs cramped. I kept running awkwardly perhaps looking like a bow-legged duck as I tried not to lose any position to the athletes behind me. I began consuming more of the electrolyte tablets I carried thinking that I really should have carried a few more. I knew that by drinking mostly Coke and water that I was not consuming enough electrolytes to replace the salt caking on my skin. The cramps cleared after a few minutes and I resumed my normal stride at a somewhat slower pace. I felt better and continued to smile for the crowd and the cameras. The cramps re-appeared a few more times and I dealt with them as best I could.

The second half of the Ironman marathon run is always about survival. I’ve seen many spectacular short course athletes implode here. It happens and could easily have happened to me, but I stayed positive with flow as my mantra as I painfully and purposefully placed each foot in front of the other. I tried to hang on to an 8:44 then an 8:49 finish as best I could but my body would only move as fast. The extra fluid and calories that I threw up on the bike would have helped me here.

It wasn’t until the last mile or so of run that I looked back to see an entourage for the lead female 100 or so meters behind me. “Wow!” I thought to myself, as I did not realize any females had been that close to me so she must have been moving very rapidly on the run. Yvonne van Vlerken would soon finish only 14 seconds behind me to record the second fastest Ironman finish time by a woman in the history of the sport.

To reiterate, I am a happy man. I wanted a personal best time (PR) and I achieved it.

Overall, I executed a smart race on a strong fitness basis. I made a few execution mistakes that I will correct in future races. I was able to successfully put myself into a flow state, which, now found, I will find again in the future even stronger.